–       Despite being a mid-February calf, APLX Ajax 14Z has kept up with the big boys all winter, developing a nice combination of performance and style with balanced birth weight and calving EPD’s.
–       With his younger age, please note his adjusted weights are higher than his actual weight at the time.
–       Ajax was born unassisted on the straw pack while we were away, and was up and drinking on his own when we got home.
–       Cherry red and heavily pigmented, Ajax showcases our philosophy of crossing polled females back on proven AI sires in order to further diversify the polled genetic pool.
–       Ajax was registered polled as a calf, but has developed small scurs since that time.  We have left the scurs in place, and you will notice them in the picture and come sale day.
–       Ajax measured an impressive 39cm scrotal at just over a year of age when he passed his semen test on Feb 28th.
–       We selected Ajax’s dam, LFS Pol Adara, from the Langer’s as a heifer calf in the 2009 Equation sale.  Now with her third calf at side, Adara has a nicely balanced udder, with 4 small teats.
–       Adara is also backed by an amazing cow family behind her – JB CDN Amethyst and the great DSLS Josie cow.
–      We have not been successful in getting a good picture of Ajax’s dam Adara – but she is more of a golden brown colour, with light pigmentation around both eyes.
–      Ajax was selected by Conostoga Farms – Melvin and Linda Bingeman of Oyen for $5,500 at the 2013 Red Deer Simmental Bull Sale 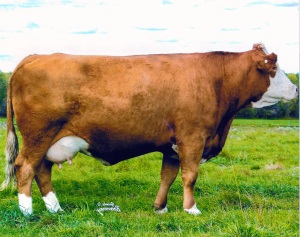