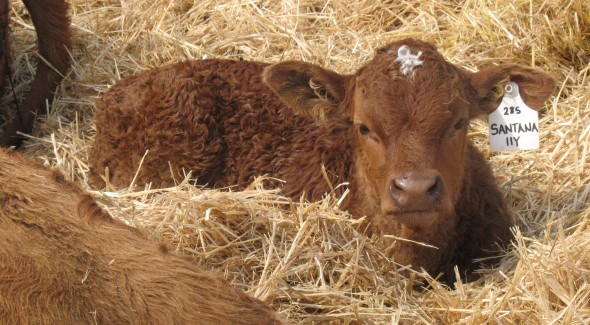 Happy Easter from Applecross.   As we pause to reflect on this week-end holiday, we remember that Easter has always been about rebirth.  In this years’ case, it has coincided with (finally) the onset of spring, and the rebirth of the land from a long winter slumber.  We have had more snow this year than we’ve experienced in our time out west (according to lifetimers, the most snow since 1974), and an unseasonably late spring has lead to our snow pack just melting down now.  Spring is about 3 weeks behind, but if the next few weeks can stay this warm and sunny, hopefully we’ll be able to catch up and still have the cows to pasture in late May.  One advantage of the late spring is the slow melt of our snow (we had about a foot and a half base), which should ensure lots of grass come summer.  We have the moisture, now let’s see some heat!

Pictured here today is Santana – a mid-March calf from Dora Lee Christina and Spruceburn Starfire.   While only just over a month old, he is developing into a good bull calf already.   Probably the most unique thing about Santana is his colour pattern.  The small white dot on his forehead, is the only white on his entire body – he is almost entirely cherry red.    While we don’t necessarily breed for colour; I do try and breed for eye pigmentation, and whenever I am on cattle tours I always take a second look at cattle with white (a topic for a future post).  Santana has quite a unique colour pattern, but hopefully it will be his length, volume and style that we’ll be talking about when we go to make our final bull pen selections in September.

Once again, Happy Easter.  We hope that you are enjoying this special day with friends and family; and are also experiencing the return of wildlife, nesting birds (and nesting calves), in this glorious rebirth of spring.

How We Name Calves

Maybe it is because our numbers are relatively small, but naming cattle is one of our favourite parts of calving. We give it a lot of thought, and we do have certain parameters we like to follow.   As we mentioned in an earlier post, we tend to follow the dam’s name on heifers and sires name for bulls.  Thus, Equinox bull calves became Ensign, Emmett and Eli, whereas heifer calves from Tasha became a Tara and a Taylor.    For some reason we also decided to prefix differently for each sex.  Boys get our herd letters APLX, while girls get the full farm name ‘Applecross’.

Originality also counts; especially for the boys.  There are certain names in the Simmental breed that, in my mind, stand for one individual and can only be reused selectively.  For example: when someone says ‘King Arthur’; I still think old school Fleckvieh Legend, rather than the recent upcoming red sire.  When I hear Rachel, I think 29X.  And, as a more recent example, when I hear Romano, I think ‘Champs’.  With a lifetime of involvement in the breed, my list of legendary names might be getting long, but I think it is important to stay original, and recognize that name association is the pinnacle of success for an animal. But until that animal hits ‘elite’ status, I think that name is pretty fair game.

Jeanne, being both a public school and Scottish dance teacher, seems to have an endless supply of ‘appropriate’ names for animals; but she also has a few names on the veto list.  If a student’s behaviour is horrible, chances are they will NOT have a calf named for them.  Speaking of vetoes, we both get one.   If we each absolutely hate a name, or if I feel it falls into that ‘Legendary’ category, there is no point using it.  Marital harmony is a good thing.   Having a calf named something that either one of us dislikes tends to lead towards a short stay at Applecross, the use of nicknames like ‘freezer’ or ‘burger boy’, and an excuse to get that animal off the place as soon as possible.

Once we run out of good names that start with the same letter, we still try to connect the dots.  Thus a ‘Princess’ will have a ‘Baroness’, ‘Countess’ or maybe ‘Duke.’  In our case ‘Treasure’ yielded ‘Jewel’ who in turn gave us ‘Ruby’ in 2010. Maybe someday ‘Ruby’ will give us a ‘Tuesday’ . . . as long as I can convince Jeanne!

Before we finalize a name, we do one last test.  We take the proposed name and imagine Jay Good or Dan Skeels saying that name off the block at auction.  If we can’t imagine them saying it correctly (whether it is pronouncing ‘Hermione,’ or saying the phrase, ‘out of the Thruster bull,’ with a straight face), then the name doesn’t get used.  While Jay and Dan are both consummate professionals, it doesn’t hurt to try and make their jobs a little easier.  Sometimes what sounds cute at birth, can sound pretty silly when that bull or heifer shows up in the sales ring or in a pedigree.

With the above criteria, we add appropriate names to our calving sheet for both daughters and sons.  One name each, with the ‘quality’ of name dependant on the anticipated calf quality.  Then once the calf is born, we immediately give it it’s name. We do sometimes change the name immediately following birth (or try to think fast and add a name for twins), but once a name has been chosen, it usually tends to stick.  Also, if we anticipate steering or culling the calf, we give a generic name (Bill, Joe, Bob) as opposed to ‘wasting’ a good name.    Throughout the years it feels much more natural being able to call the calves by name, rather than by number.   Maybe it makes us more attached to that calf; but the name always seems to become part of their identity.

After explaining all that, maybe our naming strategy sounds complicated. We think it makes sense; and with both of us having input, it tends to be fairly balanced.  I may not get to name every bull calf after a truck (although I did sneak through both an Envoy and an Escalade in 2011), and Jeanne may not get to use the names of all of her favourite Harry Potter or Twilight characters (she snuck in an Emmett!), but the middle ground tends to yield a good name – distinctive but not outlandish.   Here’s to happy naming – it is yet another fun part of breeding cattle.