Our Story of ‘Hope’

Our Story of ‘Hope’

At 4+ weeks premature, and weighing only 60% of a ‘normal’ birth weight, this is our story of an incredible little calf with an amazing will to live.

It was during a midnight cow check that a problem was spotted.  A solitary foot was protruding from a heifer who, earlier that evening had been acting close, but was not due for a month.  Just the single, small foot could mean trouble, so I went and woke Jeanne (standing instructions: no matter what the hour – if there is ever anything ‘interesting’ happening – get me up!) and we got the heifer into the barn to take a closer look.   As anticipated, there was only one leg in the birth canal.   With it being a smaller calf, we were able to push it back in slightly and get the other foot forward.  There appeared to be plenty of room for the calf, so we let the heifer out of the head gate and let things finish normally.

The good news was that it was a live calf, and she appeared to be breathing on her own.  The difficult part was that she was obviously premature and was very weak.  Nowhere was this more pronounced than in her neck, which she didn’t have the strength to lift.  Her attentive dam would lick her off, but her head just kept flopping around, providing no resistance to her mom’s attention.  Hoping that time would provide some energy, we went back to the house for a couple of hours sleep.

With both of us working off the farm, morning chores start at 5:30am.  With the calf being a ‘preemie’, both Jeanne and I went out to figure out how to ensure the calf had a good drink of colostrum.  The calf was still very weak, and did not appear to be much stronger, but at least she did not appear to be any weaker.  After assessing the situation, we quickly realized that the only way to get some milk in her was to strip it from her mom, and tube feed the calf.  Fortunately for us, the dam was fairly quiet and we were able to get her in the head gate and milk her by hand.    Tube feeding always provides mixed emotions.  On one hand it is extremely important to get that colostrum into the calf so they can turn it into energy – it is always amazing how the calf perks up after that first drink – the flip side is having to stick a tube down a calf’s throat so that the fluid doesn’t go into their lungs.  It certainly doesn’t look comfortable, and I am sure glad humans get IV’s!  We also took the opportunity to complete our regular post calving rituals of weighing her and giving her a shot of Selenium / Vitamin E.   Hopeful that the combination of milk, nutrients and vitamins would give her some more strength, we headed off to work.

Working in Red Deer, I was able to slip back home at lunch time for a few minutes to check on our new addition.  It is a tougher task with one, but I was able to get more milk from the cow and give the calf another drink.  The calf seemed stronger, with a little more control over her neck, but was still unable to stand.   After a fair bit of research, and a chat with some seasoned cattlemen, I also gave her a shot of Dexemethezone to help her lungs.  From everything I could read on the internet, the biggest survivability issue was with her lungs.  Premature calves don’t yet have the lubrication in their lungs to allow them to breath correctly, so they often live for a bit and then fade away.    The ‘Dex’ would hopefully give her lungs a little boost, and prevent them from drying out.

With both of us home after work, we put some teamwork into action.  I managed to hold the calf up to the cow, while Jeanne positioned her head to the teats.  The calf was weak, but wasn’t stupid.  Once she got a teat in her mouth, she certainly knew how they worked.   While it was certainly tiring (and occasionally frustrating) trying to get the calf to drink, it was great to see her accomplish this important milestone.   A second feeding followed before bed, and we were certainly happy things appeared to be progressing.

Wednesday morning began about the same, but we hit another milestone over the noon hour.  With a lot of assistance helping her to her feet, the calf would stand on her own.  My evening check brought a few steps of walking to her repertoire, and an attentively licking mom helped to toughen her up and gain the balance skills she needed to stay standing on her feet.  As a precautionary measure, we also gave her a shot of antibiotics – born prematurely with an immune system that wasn’t yet functioning, we hoped to ensure she had as good a chance as possible to get stronger.

I think it was Wednesday that we decided on the name ‘Hope’.  We always prefer to call a calf by a name, and by this time, spending so much time with her, it just seemed like ‘Hope’ was the right fit.  We were still in the early stages of her life, but it was so difficult not to have hope that she would make it.  For so many of our frequent trips to the barn over the previous couple of days, we had just hoped that when, we opened the door, she would still be breathing.  We were hoping that these gradual stages of improvement wouldn’t be undone by some internal challenges that we had no idea existed.

As Thursday dawned and we moved towards Friday, there was steady improvement.  With Hope now being able to stand, and her mother having decided that we were only there to help, what was previously a two-person job was compressed into just one.   I could get Hope standing near the right spot and Hope would brace herself against her mother’s back leg on her own, while I just had to worry about ensuring her head got in the correct position to get a drink.  She became more confident and sure of herself until, on Friday evening, all I had to do was get her up, and she knew where to go and what to do.  The best part was Saturday morning, when we went to the barn and found her drinking on her own. 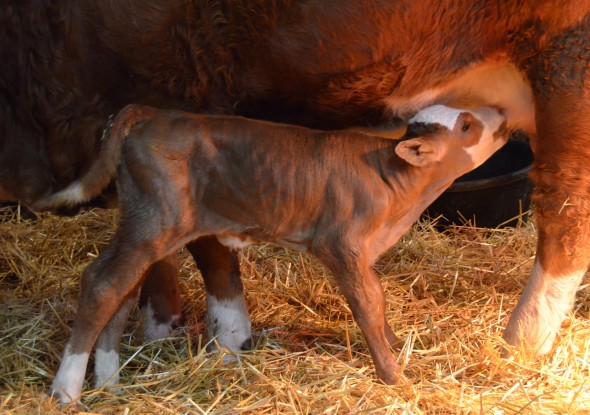 Hope stayed in the barn for almost a month, to grow her limited hair coat out to a more normal length, before we let her outside to join the other calves.  After spending so much time with her, it was truly special to see her out ‘bouncing around’ and playing with the other calves; just like normal.  From what we can determine from our breeding chart, Hope was born 29 days early.  The odds of her survival were extremely low, but with some hard work and some faith, she has made it through the toughest part.  We are cautiously optimistic that she will continue to progress, and keep up with the other calves.      It is just an incredible sight to see her standing out in the pasture with her very attentive mom – drinking away – her tail still going like it did in those first days – just another sign that makes makes us optimistic.   It is hard not to become attached to a calf that took so much time and energy, so we remain ever Hope-ful that everything turns out alright.