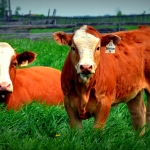 One of our favourite warm weather Sunday traditions is a late morning walk.  Starting out the back door, we make a big circle around the property – striding the hills and the valleys – across lowland and wooded areas – until we end the circle at the garden behind our house.  It is a great way to spend an hour, and not a walk goes by without both of us talking about how blessed we are to have found Applecross.

The cows went to grass yesterday, so there was even more to see on today’s tour.  We are very fortunate to be able to pasture all of our cattle here at home, and keep a nice and close eye on how they develop.  All three groups – the bred heifers, the bull calf group and the cows with heifer calves – each have their own multi-paddock grazing rotation, where they got to take their first taste of the season yesterday (finally… in their opinion).

Calving and breeding seasons were both very successful for us.  After a couple of harsh weeks of winter right at the first of the year, the weather become milder and we were able to monitor numerous births outside on the straw-pack.   We pastured our cattle later last fall, so birth weights were lighter to start the season, but picked back up by early February.  We also had great luck with colour – not that it makes a difference from a quality perspective, but it does aid in marketability.  We finished our calving March 12 and moved immediately to breeding.

Breeding season represented a major departure for us.  Although our herd bulls have traditionally carried our own prefix, we were successful in acquiring NUG Delmonte 81D to join our walking bull battery this spring.  His purchase creates such a unique combination of stress and excitement. Stress because we can only wait to see how he passes along all the characteristics he possesses as an individual.  But excitement in what we believe he can bring to our operation. He has been thoroughly tested this year – he got some young cows, some older cows; some tall cows and some smaller cows; some that were polled, some horned; some with lots of hair; some tan coloured; some that throw birth weight, some that don’t.  We should have a great idea what he is all about early next year.

We walked three bulls total in 2017 – Delmonte was joined by Rambo (our heifer bull), and FGAF WowEffect, who made one final turn with the girls.  With Delmonte on the prowl, we did limited AI (mostly heifers), but did manage to get a few cows synced for recips.

Now that breeding is over and everyone is in their pasture groups, calves can be evaluated side by side.  It is an exciting time to start the assessment process and debate over which ones will make the cut at weaning.  Calves can just change so much as they grow.  They tend to shoot up and get ‘leggy’, then fill out their frames (and look awesome), and then go through the process again.  It all depends on the day as to what I tend to think of them – sometimes they are looking amazing, other times more on the ‘green’ side.  There do always seem to be outliers though; some calves always seem to be at the top of the group – ones that have the potential to become special.   (Our picture girl ‘Brittany’ falls into this category).

For the second consecutive year, we have our best heifer calf crop ever (which, as someone who strives for ‘genetic improvement,’ is a pretty cool thing to be able to say).  In both of the past 2 years, we have skewed to a 60-40 heifer-bull calf split (so there are more to choose from), but we have also got more genetics bounces (where my hair-brained ideas actually seemed to work) in the heifer side.   We will need to make some really tough decisions at weaning to get our heifer calves down to a more manageable number.

Likewise, in the bred heifer group, there are some difficult selections to be made for Fleckvieh Equation.  We wintered 14 heifers this year (quite a lot for us – and we may need to winter as many or more next year), so after a year ‘off’, there should be some exciting options for Equation.  The first WowEffect daughters will sell, and now that the entire group is back together, there are some pretty cool younger heifers that managed to catch up in size to their older pen mates during breeding season.  It is still a long ways from fall sale season, but it is sure fun to start thinking of the choices we will need to make (and of course which ‘veto’ we will each use).

With all my glowing commentary about heifers, I don’t want to imply that our bull calf crop is lacking.  While fewer in numbers, there are some neat bull calves we are keeping our eyes on as well. For the third year in a row, it looks like our bull pen will be anchored by WowEffect sons.  Anchor D Viper and Rambo calves are also strong candidates to winter and make the bull sale.   It is early yet, but there certainly appears to be promise.

So, that’s our cattle circle.  We tend to walk it the opposite direction to my description, though – bull calf group first, followed by our walk through the woods, and then on to the heifer calf group as we start our turn for home.  As we cycle back towards the buildings, our bred heifers greet us (with Jeanne at my side, they greet us both figuratively and literally.  Several of her favourites need their scratches!).   On the genetic front, it seems like a constant period of evaluation.  We have lots of thoughts as to future combinations.  There is some satisfaction, but also thoughts on where we need to be better – and refocus on my 20-60-20 rule.  Overall though, there is a general sense of contentment.  We are truly blessed to be able to pursue our passion in the cattle business, and to spend our Sunday mornings watching them work in their natural environment – turning grass into meat and milk. 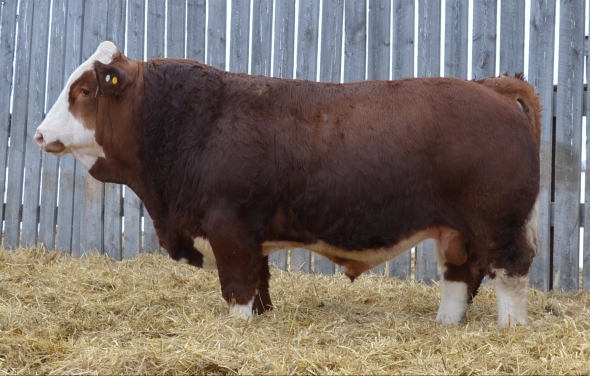 March 23rd was another great day to hold the Red Deer Simmental Bull Sale at the Westerner Grounds, Red Deer Alberta.  A little bit of fog cover started the day, but the sun soon poked through and combined with mild temperatures to create beautiful travelling weather to see a great group of bulls sell.  Customers had the opportunity to have a hot beef lunch and inspect a high quality group of bulls presented by a number of great consignors, before watching them strut their stuff in the sales ring.

In all, five bulls ended up topping the $10,000 threshold at this years’ event with the high-sellers being a pair of Fleckvieh bulls.  Lot 18: Starwest Density is Manitoba bound after this dark red meat machine was selected by Triple T Diamond of Lundar for $15,000.  ‘Density’ was closely followed by Lot 65: Keato Pld Directors Cut, a moderate birth weight rascal selected by Swantewitt Simmentals for $14,000.  Overall 49 lots sold for an average of $6,100.

The highlight of the day for Applecross Cattle was the return of one of our commercial clients, Barney Beechinor.  Barney had selected APLX Edge from us at the 2013 Red Deer Bull Sale, so it was pretty special to watch him pick up two more bulls from us this year.  First Barney selected Lot 49: APLX Pharaoh 2D from the opening group of fullbloods, and then later on in the sale, Barney also selected Lot 51: APLX Wagner 10D.  It is always a great feeling when, after having success with their previous purchases, clients return for a replacement (or in this case two).  We look forward to watching Pharaoh and Wagner’s genetics contribute to the really strong Beechinor commercial herd.

It was also fantastic to see Lot 52: APLX Raider 22D head south to Glen Ball at Millarville.  Glen was looking for a new heifer bull to walk the foothills south-east of Calgary, so we are quite happy he found the traits he was looking for in ‘Raider’.

Once again we need to recognize the team at Transcon for doing a tremendous job working the phones and managing the sale.  Jay Good and his team are always a quality, sales management group – constantly on the phone while inspecting cattle for prospective buyers.  We look forward to working with them again later in the year at Fleckvieh Equation!

With both the bull sale and calving now behind us, our thoughts move directly to breeding season.  We have some recips this year, a couple of new options for AI and a brand new walking bull to test out.  It is an exciting time for Applecross Cattle to continue in our quest to provide new, better, and different genetics to share with the industry.