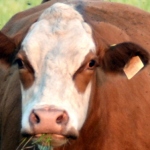 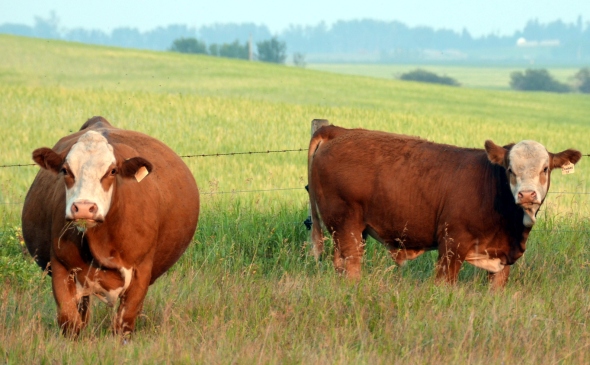 Setting the Scene:  March 1998.  Seated around my parent’s kitchen table at Dora Lee, we were finishing up another wonderful home cooked meal of “meat and potatoes and such”; savouring the last crumbs of mom’s incredible fresh baked pie.  Directly below the Simmental bell hanging in the window, on one corner of the table, was where all of the key reference material for cattle discussions was located: the 1998 calving sheet, (hand printed on a yellow file folder, listing all of the cows and their calves, with descriptions and name suggestions), our semen inventory listing from United Breeders (the twice a day AI service in Ontario – available for beef cattle! It sounds pretty weird when described to an Albertan), the February Simmental Country, and the Alta and Semex Beef Sire directories.  The conversation had flitted all around cattle during the meal, and now everyone was settling in for a deeper discussion.

Jeanne and I, married almost a year by then, were up visiting the farm for the week-end.  We always looked forward to escaping the confines of our one-bedroom apartment in Brantford, where my first-job-out-of-school as an AG banker had taken us.  While I was learning the ropes at the bank, Jeanne was making the 200km round trip daily commute from Brantford to the University of Western Ontario in London to finish her teaching degree.  We were still young, still getting into the rhythm of our fresh, new partnership.  But I suspect our kitchen table was similar to a lot of farm tables across the country – once the meal finished, the chairs would be pushed back (tea would be poured), and opportunity of having everyone together would be leveraged to engage in conversation that shaped the future of our farm.

We didn’t realize it at the time, but the discussion that day turned out to be a momentous one – should we try and incorporate the polled gene into the Dora Lee cow herd?

The spring of 1998 rounded out a 12 month run of success for Dora Lee that suggested an incredibly promising future.  Our first ever ‘AI bull’ Dora Lee One was working for CIAQ and had developed into a 4-star trait-leader.  The summer of 1997 had led Mom & Dad to PEI for the Canadian Simmental AGM, where they discovered RH Patricia working for Robblee’s.  They promptly arranged to purchase her calf at side, and lease Patricia for a flush – the flush that would turn into Dora Lee Native Son.  September’s Fleckvieh Forum sale saw an awesome open heifer by the name of Dora Lee Franchesca selected by Master Breeder Barry Labatte.  In November, the legendary Bob Gordon stopped in for a visit and selected Dora Lee Jake on behalf of Alta Genetics.  All in all, a very transformative 12 months!

So the question and debate really became one of why?  If we were just starting to enjoy some success – why should we shift our focus to polled?  Why not keep to the path that we were on?

The answer to our query was found in the questions that were starting to be asked by our customers.  Beef herds in Ontario (and Quebec, where Dora Lee One was working) are generally smaller and often had to be supplemented by off-farm income.  As a result, we were starting to get requests for both moderate birth weight and polled bulls; both of which would make management of the calving process significantly easier.   Neither of these traits was present in the Fleckvieh of the day!  In fact, the BW/Calving Ease issue was probably the biggest concern we had with Dora Lee One – he had a ton of performance, and his daughters had lots of milk, but we were getting feedback that calving was an issue – so this was an area we thought we needed to focus on.  Our goal thus became both –  to leverage our highly maternal herd to not only take horns off, but also use moderate bulls that would ensure additional calving ease.

Dad has always been adamant that, as a purebred breeder, we need to see where the industry is going and move there first.  This would ensure we had cattle that were in demand when commercial interest caught up.  Trying to project the future is always a daunting task (right Oilers fans?), but the alternative – multiplying popular genetics today with the hope that they will still be popular tomorrow – didn’t seem to be a successful approach either.

That day, we decided to flush Dora Lee Fraline (dam of Franchesca) to Eisenherz, the ‘new’ polled bull being offered by Alta Genetics (if I recall correctly, our other option at the time was ‘Holburg’, and Eisenherz seemed to be the ‘least-bad’ option).  We hoped that we would get a polled heifer calf that we could start building a polled program around.  We knew this wasn’t going to be an easy journey, but thought that given time, and multiple generations of offspring, the challenge of successfully integrating the polled gene into our program was one we could accomplish.

In 2006, Jeanne and I moved to Alberta, to follow our own dream of Applecross Cattle.

In 2008, we convinced Mom & Dad to allow us to pick 4 cornerstone females to build and establish our own herd around.   One of the females to travel west?  Dora Lee Evangaline.

And the rest, as they say, is history.

There have been stops and starts along the way.  We were extremely fortunate to be able to move from Fraline to Eclipse in just seven years, while adding two generations of proven horned genetics to his pedigree.    Eclipse was a tremendous step forward for us.  Having access via AI to a privately owned polled bull we were comfortable using, allowed us to multiply genetics much more rapidly throughout the herd.  Eclipse also had the added bonus of being a great heifer bull, which meant more places that we could use him.  He also gave an early homozygous son – Dora Lee’s Equinox – who possessed a little more power, but was guaranteed to take the horns off.   We were very lucky to have been able to utilize both of these bulls so early in our polled journey.

We have also been constantly reminded that this is the cattle genetic business, and stuff happens – even a 50-50 chance at polled offspring is not that conducive to expanding and diversifying a nascent polled division.  At Applecross, our first 8 Eclipse progeny were all horned.  Only 2 of our first 12 Equinox calves were heifers – which delayed herd building but did yield us Envoy (who has left his mark at Lone Stone) and Escalade (who we utilized as a heifer bull for a number of years and have progeny walking here).   It is sometimes very difficult to be patient!

As it is known to do, the industry also swung on a pendulum.   The first polled Fleckviehs that were marketed simply didn’t have the quality and performance required to stand beside their horned contemporaries. (I seem to recall a phrase ‘if you take the horns off, you take the butt off too’).  Once burnt, both purebred and commercial breeders shied away from polled cattle and a perception grew that having polled genetics in a pedigree make it weaker.  Phrases like “100% horned pedigree” or “polled – with 97% horned pedigree” – popped into the vernacular of Fleckvieh Enthusiasts.  (I would also suggest that I have seen some pretty mediocre 100% horned cattle over the years, but that is a conversation for another day).  Even the compliments came with a qualification: “looks pretty good…for polled”.  Over time though, as the polled genetic pool continues to widen and get more diverse, there has been a significant amount of progress made.  Quality and consistency has improved, and once again (anecdotally at least) we are seeing an increased interest from both commercial and purebred cattlemen in polled genetics.

For 2018, almost half of the females we bred at Applecross this spring are polled (and the walking herd at Dora Lee is now more than 90% polled).  So, while we are well along in our journey, there is still plenty of work to be done.  We still source outcross horned genetics to continue to widen our polled gene pool, and we are still breeding horned cows to horned bulls.  I am a firm believer in the concept of being ‘barn blind’ and just because a calf comes out with a polled head, doesn’t mean it will be good.  We absolutely have to keep checks and balances in place to ensure the quality is there to compete in our marketplace.  Single trait selection has never been a winning strategy in developing cattle, so we continually remind ourselves that this journey will be a very slow process.  It sure is nice when we don’t have to dehorn a calf though!

As I reflect on a decision made 20 years ago, it has been a pretty cool trip that will have plenty of twist and turns (and great scenery) still yet to come.  I am extremely fortunate to share my passion for genetic improvement with my parents – and that those discussions about cattle have continued – they have just shifted from the kitchen table to a weekly Thursday night phone call.  13 years after he was born, I am still utilizing Eclipse on heifers – which may be as much a statement about the bull, as it is about the challenges in finding bulls that meet all of our heifer bull criteria.  Dora Lee Evangaline was a cow I always struggled with, and never thought I was able to breed her to her potential (The silent heats didn’t help either!).  But in hindsight, she has 6 progeny still working here, and she shows up in the pedigree in two of our recent high sellers (Applecross Pippa and APLX Rocky), so maybe my perception during her stay here doesn’t match reality now that she is gone.  This is the cattle genetic business.  Stuff happens, both good and bad.  But the challenge is worth it – to reflect back – and see progress.  It keeps us going; and makes us strive to be better.