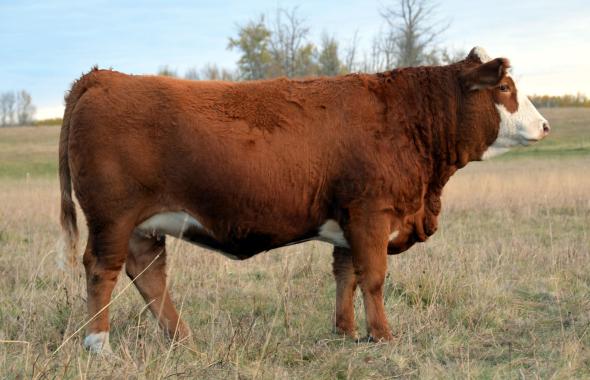 Applecross Janelle – one of the top bred heifers we have retained.

We have completed our annual refresh of our female section (Herdbook > Foundation Females) with updated pictures and new pages to showcase some additional females. The pages fall into chronological order, with our oldest cow (Jewel) at the top, and our youngest female (Taylor) at the bottom.  As our herd is made up predominantly of young cows, a year can bring significant change as they grow and develop into more mature animals.   The challenge is, of course, getting updated pictures that reflect the phenotypical change (not to mention to convince the cows that they should stand to get their picture taken!).  Over the years I would like to get a good picture of every quality female we own, but there are always some that can escape the camera.

Featured above is Applecross Janelle.  Janelle is one of our top bred heifers, and was originally selected for this year’s Fleckvieh Equation sale.  An Anchor T Ikon daughter, by a powerful Dora Lee Eclipse dam, Janelle (and her dam Jasmine) have caught the eye of many of our visitors the last couple of years.  After a lot of discussion, we decided it would be best for the long term success of our operation to retain Janelle (and all of our bred heifers), to help grow our numbers here at Applecross.  We look forward to Janelle’s 2013 calf by the polled calving ease bull Sanmar Pol Pharao in mid January. 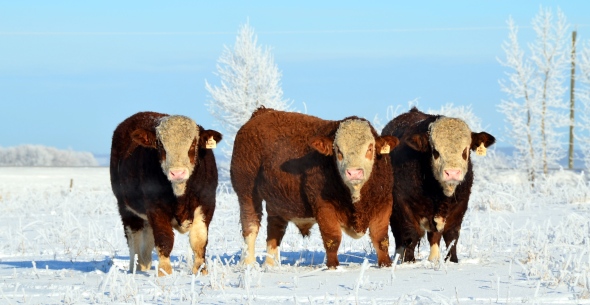 While it seems to feel more like winter with every day (and every snowfall), the calendar insists we are still in autumn.  Thankfully, the ‘fall work’ is done, and there are just a few jobs left to get finished prior to the ‘real’ winter and an early January start to calving season.

This years’ calves continue to develop and mature.  With some time off the farm in November, being away for even just a few days means that you can appreciate the size difference when you get back home.   The bulk of our calves were heifers in 2012, so after a thorough culling, we only have a small group of 3 bull calves to winter, which we think make a nice, consistent group.  Pictured above from left to right are Ajax, Edge and Axel.  APLX Ajax 14Z, the youngest (Feb 17th) bull, is an intriguing polled Gidsco Appollo son.  The middle bull is APLX Edge 4Z, a tremendously long Equinox son, who projects to be the heaviest bull come bull sale time (and is also polled/scurred). The bull on the right is APLX Axel 5Z, who is also an Appollo by our Tasha (Porterhouse Regent) cow.  Dark red with a moderate frame, tremendous depth and thickness,  Axel was picked out by many of our visitors this summer.  We look forward to watching them develop over the next few months, before getting them semen tested and cleaned up for pictures.  Assuming all goes well, the bulls are tentatively set to sell at Transcon’s Red Deer Sale in March.

With all of those heifer calves around, I really look forward to watching them mature, and can’t wait to see them on grass next summer – I think they will be an amazing group.  There are a quite a number of really strong heifers – in addition to the Viper daughters I talked about previously, I also really like how our Eclipse, Broadway and Pharao calves all turned out. I think they will all turn into awesome front end females.  We have more pregnancies from each of those four bulls on the way for next year, so we are really looking forward to what January’s calf crop brings.

With our herd numbers almost to where we want them to be, 2013 is the first year that I will actually be hoping to get bull calves.  There are those certain cows that haven’t given us a daughter yet, and there are some matings that you visualize with a heifer in mind, but for 2013 I am hoping for a real strong set of bull calves to choose from.  While we do plan on marketing females at some point, it is our bulls that head to town annually to showcase our operational and genetic philosophy.   We will have a diverse group of matings coming up, and I think all of them have the potential to be very good, with hopefully some tough selections to be made next summer when whittling down 2014’s keeper pen.

This time of year, while most people start getting excited about Christmas, I start anticipating the start of the new calving season in early January.  Calving never goes exactly as planned, and some of the combinations that seem so exciting now, may not pan out the way we expect, but it will be an exciting time nevertheless.  You never know what you are going to get until that calf arrives safely (and then that is only the start of the journey).