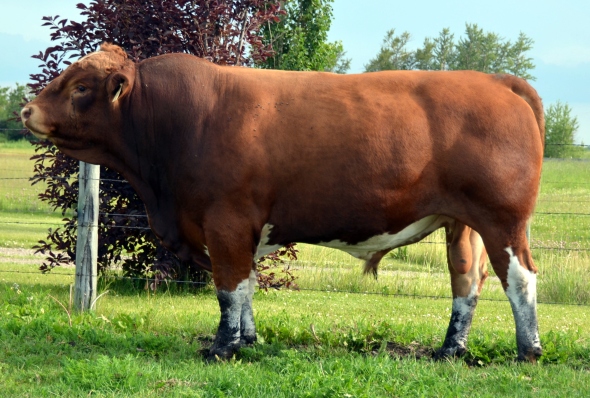 Samson is a younger bull, being a March 20th calf.  Although born late, he definitely had enough performance and potential to make our bull pen.  After watching him keep up with the bigger bulls all winter, our eyes kept being drawn back to this impressive, deep bodied bull.

Samson’s dam,  Dora Lee Evangaline, is the foundation cow of our polled program.  A rare, polled Sim-Roc C&B Western daughter, she is a star-faced beauty that does nothing but work – we also have 3 daughters, and 2 grand-daughters, in our herd.  Evangaline is also a maternal brother to Dora Lee Eclipse, who is leaving his influence as an easy-calving, coloured right, cow maker. Her dam, Dora Lee Elexis also followed her daughter to Alberta, as she was purchased private treaty by Dan & Karen Skeels at Anchor D Ranch.  While both Evangaline and Eclipse have already left a tremendous mark on our herd, we are happy to expanding their influence further with Samson.

Samson measured up at 39cm at 12 months, and we put him out to work at 14 months – he went right to work, with no problems breeding his group.  We have pictured below both heifer and bull calves (both polled). We look forward to a much larger selection in 2014. 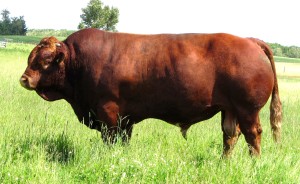