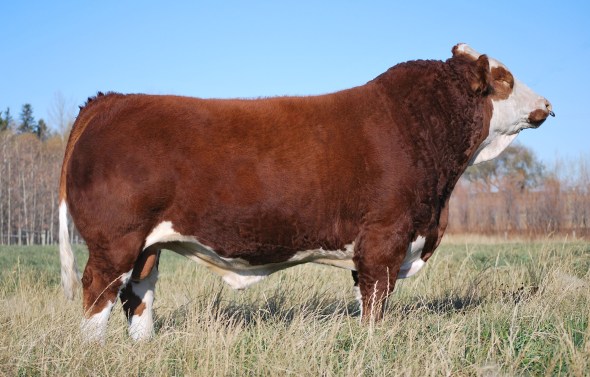 I spent a few days in Manitoba for Transcon’s National Trust in early November.  The sale had a large number of quality animals, and showcased the breed well under the big lights of the Brandon Livestock Expo.

I have attended all five of the National Trust sales, and really enjoy the concept. The   idea that the best in Simmental genetics can be brought together in one sales event, in a ‘showcase’ type format, has a lot of merit, and over the past 5 years I think it has proven to be a resounding success.  We were fortunate enough to be able to showcase a bull at each of the last two events, and with the success we experienced we thought it important to continue to support the sale in its new location.

While we weren’t successful purchasing any live lots, we did acquire 10 more doses of Anchor D Viper semen.  We watched this bull sell, and originally acquired a semen package in the spring of 2011.  This year Viper sired a couple of our top heifer calves, and we admired how his bull calves looked in the Beechinor string in Red Deer.  With Viper’s passing away this summer, leading to questions around future availability, we thought it made sense to invest now in increasing our semen bank.

We are also impressed by Viper’s genomic profile that the John & Stephon Beechinor were willing to share with us.  He has tested to be very feed efficient (top 1% of the breed), while still remaining above the breed average for ADG.   Our two heifers also tested well, showcasing his ability to pass these genomic indicators to his offspring.  While great genomic markers don’t mean a whole lot if you don’t like the calves, the combination of outstanding physical traits with great genetic potential is something that was worth the additional investment.

I really enjoyed the Brandon facility – having the barns, hotel and restaurants all under one roof was a pleasure – especially considering the 6 inches of snow we received on Friday.  It is a concept that deserves merit at other locations (Agribition in Regina, Westerner Park here in Red Deer).

One of the hidden benefits of  moving the Trust to Manitoba this year, was that it also allowed us Albertans an excuse to go and tour farm operations while we were in the province.  While in Manitoba, we got to see both Kopp Farms and Big Sky Simmentals.

Kopp Farms had a tremendous group of about 100 bull calves; nicely weaned, all tie broke(!), and already strutting their stuff.   I am far from being an expert in red Simmental genetics, but I thought the Crosby and Walker sons really stood out. On the heifer side, I really liked the Virginia Santiago calves.  We really appreciated the time and Edmund and Pauline Kopp spent showing us their program.

Despite all the snow on the ground, I also really enjoyed touring Big Sky (at Amy and Trevor’s).  While it wasn’t the home ranch, there were a lot of impressive bull calves and an awesome group of big, powerful Fleckvieh cows just finishing up on pasture.   I have always admired the performance in the Big Sky cattle, and after seeing some of their cows and bull calves, it is clear that the power is backed up deep on equal sides of the pedigree.

Both of these herds have high quality cattle, from which I could envision acquiring genetics in the future, so it is great to be able to visit and get a closer insight into their operation.  It was certainly a lot easier to get away in early November, than to try and juggle calving with attending their respective Feb-March bull sales.  As both breeders had cattle in the sale itself, it was great that that they were able to take the time to tour us around their farms, despite being so busy.  There are a number of other operations I’d like to visit in Manitoba, so here is hoping that I will be able to make it back to tour some more in the next few years.

While it was a short visit to Manitoba, it was great to see such great cattle and visit with such knowledgeable breeders  – both in Brandon and on our tours in the countryside.  I look forward to seeing what excitement the next edition of the National Trust brings.

This entry was posted on November 23, 2012 by aplxcattle. It was filed under Uncategorized and was tagged with Anchor D Viper, Beechinor Bros., Big Sky Simmentals, Fleckvieh Bulls, Kopp Farms, Transcon's National Trust.