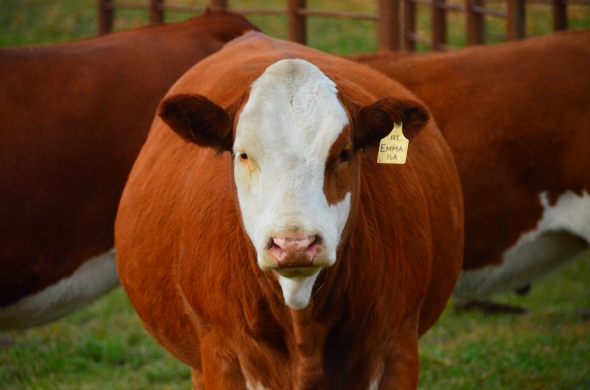 The 2014 Alberta Simmental Week-end wrapped up with a bang on Sunday December 22nd, with Transcon’s Fleckvieh Equation Sale placing the exclamation point on an amazing week-end for the Simmental industry.

Unseasonably mild temperatures, combined with a record cattle market and very deep set of cattle, led to the largest crowd in attendance for quite a number of years. The sale was led off by the first four lots (lots 2-5) from the high-end Beechinor Brothers string, which averaged an incredible $19,000.  Their group was highlighted by Lot 5, a Radium x Viper bred heifer carrying a BRINKS BULLETPROOF pregnancy, that sold for $31,000 to Starwest Farms of BC.    Overall, the first string of 13 bred heifers showcased the incredible depth to the sale, averaging just under $14,000.

For the first time in a few years, two elite herd sire prospects were put on offer.  JNR brought two burly rascals to town; JNR’s Philosophy sold to Crossroad Farms for $40,000 and JNR’s Warrior sold to Ricochet Stock Farms for $11,500.

Our five Applecross Females were all in the second group of bred heifers to move through the ring.   Dora Lee Eclipse continues to get it done for us, as his two daughters led off our string, with Applecross Emma being selected for $9,000 (our high seller) by the Beechinor Brothers of Bentley, and her running mate, Applecross Alicia ($6,100) is slated to join the polled program of Brooks Simmentals from Turtleford, SK.  O Double E Simmentals from Grande Prairie purchased Applecross Whitney for $6,750; Applecross Rhianna was acquired by Riley Edwards, Skywest Simmentals, from Didsbury for $6,700.  We were especially pleased to see repeat customer, Barney Beechinor (who is currently walking APLX Edge in the renowned 400-cow-strong Beechinor commercial herd), select Applecross Glory for $6,000.  Overall, it was a tremendous day in Red Deer on December 21st.  Once again Transcon put on a tremendous event – working the phones and showcasing the cattle to ensure a top quality, well managed sale.

It was a great day to present Applecross genetics for auction, and we were humbled and honoured by the amount of interest we had in our program.  With 2015 just around the corner, we look forward to the start to calving season, and another step in that ongoing effort to produce high-quality genetics that we can share with the industry

This entry was posted on December 31, 2014 by aplxcattle. It was filed under Uncategorized and was tagged with Applecross Cattle, Beechinor Bros., Beechinor Brothers, Dora Lee Eclipse, Fleckvieh, Transcon Livestock.